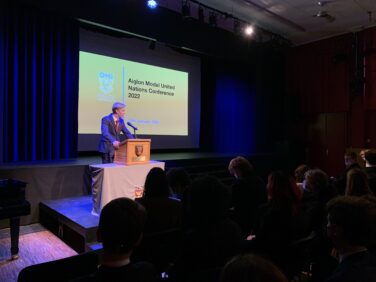 At the end of January, Aiglon welcomed around 100 delegates to our campus from other Swiss international schools for our second Model United Nations Conference on the theme ‘An Equal World’. 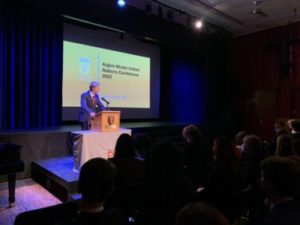 Model United Nations provides students with the opportunity to formally discuss current issues of global significance from an assigned nation’s point of view, presented from a perspective that is different from their own. Aiglon students were joined by students from Le Regent, Le Rosey. Malvern College (Leysin), La Garenne, Brillianmont, Haut-Lac, and Ecolint. The conference was led superbly by our student officers notably Alex (Alpina, Year 12) as Secretary-General, and Jude (Delaware, Year 12) as Deputy Secretary-General.

37 Aiglon students took part, debating issues such as equal access to education, equal access to healthcare, the security situation in Afghanistan, and the assimilation of refugees into their host country. We were extremely proud of the preparation and the quality of the speeches given by our students, the welcome and the support offered by our novice students who acted as Committee Admins, the IT prowess shown by Hiroshi and Kevin, who created the Aiglon MUN website and of course, the leadership skills shown by the committee chairs, who managed very well groups of delegates with a range of levels of experience: Jude as Chair of the Security Council, Wilfie as Chair of the Human Rights Committee, Dina and Pedro as Co-chairs of the Economic and Social Committee and Co-Chairs Rakan and Harry of the World Health Organisation Committee. 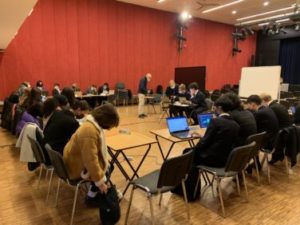 Model United Nations is going from strength to strength at Aiglon following from a strong legacy left by Martin Goff. We were delighted that Martin, Alumni English teacher at Aiglon and long-standing member of the THIMUN advisory board was able to join our conference as Keynote Speaker, giving delegates food for thought on the role of policymakers in working towards the global goals of equality, peace and sustainability and encouraging all delegates to take initiative and grasp this opportunity of collaboration and exchange.

After three sessions and quite a few resolutions passed, the conference closed with the announcement of the Best delegate in each committee. Aiglon delegate Mitsuke Morisaki, representing Australia, won the title in the Human Rights Committee.

We are very proud of the student leadership shown during this conference and all visiting MUN directors were extremely impressed by the standards of preparation, presentation and conduct shown by our students.