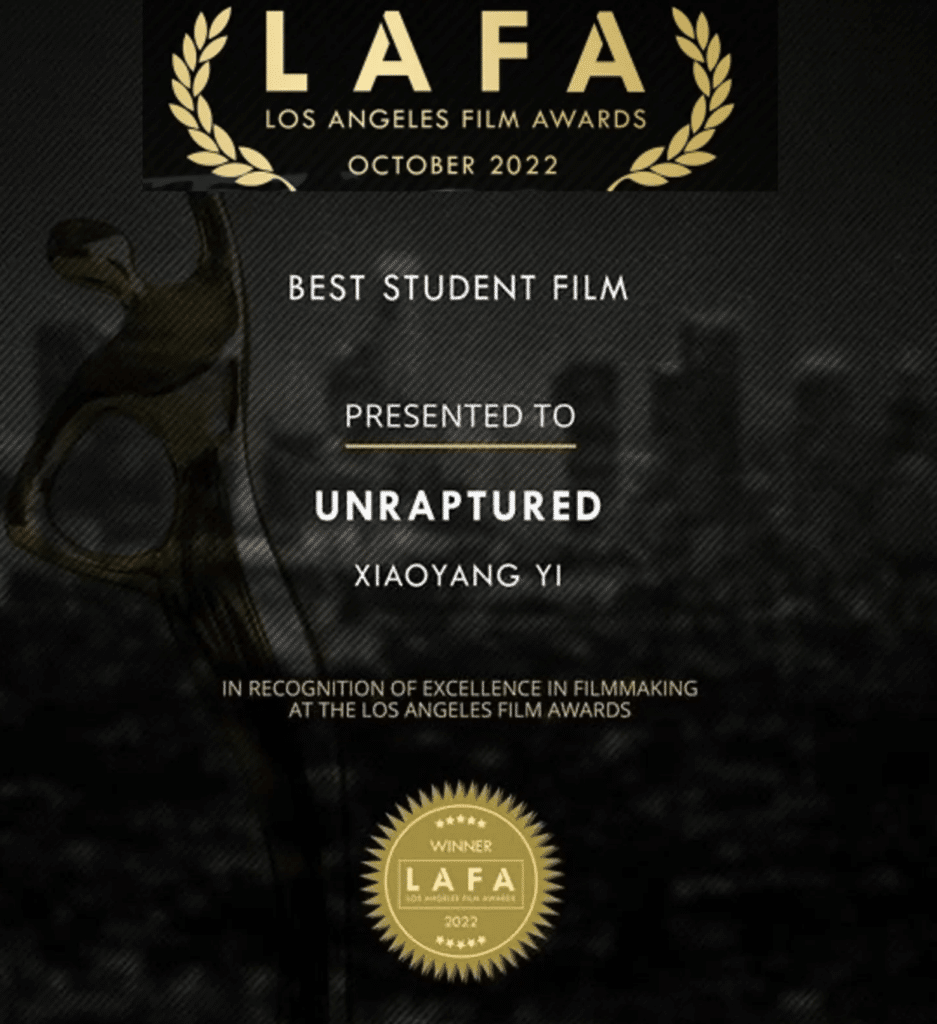 Unraptured, a film by Lyceum Alpinum Zuoz IB student, Xiaoyang Yi, won Best Student Film at the Los Angeles Film Awards in October 2022. The film was shot over three days in the summer of 2022, in Beijing. We asked Yang about his film and his own remarkable journey from competition level skier, to award-winning young film-maker.

Congratulations first of all. How did it feel to find out you had won?

I absolutely did not expect to win. I remember searching for my film in the list of the top fifty, which was in alphabetical order and my heart was really pumping by the time I reached the letter ‘u’.

‘U’ being the first letter of the title of your film, of course. Why ‘Unraptured’?

Well, it’s a religious reference to the ‘rapture,’ which I had been studying in the work of Bosch, in my Visual Arts course. And the whole idea of a kind of cleansing or reset through a ‘rapture’ started me thinking about lockdowns and quarantines and what effect these policies have had on people. I mean, did they backfire and do more bad than good?

Did you set out to make a film that was explicitly a commentary on COVID policies or does the work just happen to be situated in that context?

I would say both. More than anything, the work arose out of my own experiences. I was in quarantine twice, for about a month and a half in total. There were hardships, like the lack of a proper toilet in one place. But what I remember more than anything is the overpowering sense of confinement and restriction, which the two main characters in my film are also fighting against.

So let’s talk about the experience of making the film.

Well, I just learned so much from making this film. Starting with the set. It was a family friend’s place. Renting and furnishing a set is really expensive. I had this old, wooden Beijing house with a nearby forest. So the first thing we did was use duct tape to wrap everything in plastic garbage bags and we realised this produced a spectacular light. But even with great results like that, filming can be really stressful. We had so many scenes to film, and so little time. And there are so many small things you just don’t think of, like feeding the actors. With all the things to think about, I forgot that the actors would need food. And we had to get the day’s filming done while it was still light. We were rushing from the forest to the house, doing everything before the sun went down.

That image immediately brings to mind the lines from the Dylan Thomas’ poem ‘Do not go gentle into that good night’, which your characters repeat throughout the film. The line is a call to resist, to not just passively accept. Do you think that is what art can be?

More than anything I want to tell stories. And it’s fine if those stories become something else, separate from my own beliefs and feelings. But of course this particular poem supports my main character, A, whose loved ones are dying outside, and the poem drives him to rebel.

Has art been your own kind of rebellion?

When I was in kindergarten, I told my parents I wanted to be a doctor. They were thrilled. Then I told them I wanted to be an artist, and they were … less thrilled. But they support me, they really do. And here I have to talk about skiing, because if my parents had not seen what I achieved as a skier, there is absolutely no way they would have let me put so much energy and time into art.

Not everyone will know that just a couple of years ago, you were training and taking part in national level skiing competitions. In fact, you were national slalom champion in China in 2021. They are very different achievements, but are they connected in any way?

Yes, they’re linked. But understanding how is a bit like untangling spaghetti. One thing I do remember clearly, was all the time I spent in isolated places, at the tops of mountains, where I would spend the night after a day of skiing. I often had no internet connection in these places. And I began to draw.

So, we’re talking about isolation again. But this isolation gave you the space to begin to explore art.

Yes, definitely. I had to entertain myself and I drew and drew. And when the skiing came to an end, I transferred my energy into art. And eventually, I began to think I had discovered a different gift, nothing like my ability to ski. And I have been able to pursue that. I have to say something here that I try not to hide from. I’m privileged. And there are many art students who aren’t. I made the film on a very low budget, but I know that there would have been many artists on that list, who had struggled to come up with the money to pursue their projects. So, of course, just to be involved at all is something I feel deep gratitude for.

What’s the next step?

I’ve dipped my toes into a lot of media, and that process is still ongoing. There is still a lot of exploration I have to do, and that can’t be rushed. But I will definitely be going on to study art when I leave the Lyceum next year.